Sustainable Jersey is a certification program for municipalities in New Jersey that want to go green, save money and take steps to sustain their quality of life over the long term. Launched in 2009, this is  a nonprofit, nonpartisan organization that provides tools, training and financial incentives to support and reward communities as they pursue sustainability programs. http://www.sustainablejersey.com/fileadmin/documents/2012/Green_Team_Resources/SustainableJerseyBrochure.pdf

The Harrington Park Green Team, an advisory body to the Environmental Commission, first met on October 7, 2009. At the first meeting this mission statement was chosen: the Harrington Park Green Team is committed to developing strategies that will reduce our impact on the environment both collectively and individually, so that we might preserve our town’s natural resources for the citizens of Harrington Park now, and in the future. The goal of the Team was (and is) to identify and pursue actions for Sustainable Jersey Certification through the municipal buildings, the community, and the Harrington Park School. Open to interested community members and including the EC and Mayor, the Team met regularly for over 3 years to accomplish this goal.

In the summer of 2012 Harrington Park submitted documentation for 3 of the 7 priority actions (2 were required), having completed: 1) an energy audit for municipal buildings, 2) a municipal carbon footprint, and 3) a fleet inventory. 150 action points were required for certification; Harrington Park completed 170 action points in 7 categories, including Community Partnership and Outreach, Energy Efficiency, Greenhouse Gas, Food, Natural Resources, Operations and Maintenance, and Waste Management. On Sept 11, 2012 the submitted application was approved and Harrington Park was certified at the BRONZE level.

From the Sustainable Jersey Website: http://www.sustainablejersey.com/actions-certification/annual-awards/ Each year Sustainable Jersey presents awards in four categories: Sustainability Champion, Innovation/Creativity, Leadership and Collaboration. Award winners are selected from the municipalities that were certified or recertified in the designated award year. The Innovation and Creativity award recognizes one municipality that contributes most to Sustainable Jersey by pioneering or testing a significant innovation and/or incorporating creativity and the arts into their sustainability efforts. The award recognizes the development of community and social capital through creation of a culture of creativity, originality, and forward-thinking that can lead to new best practices and strategies by which we pursue sustainability.

Harrington Park was given the Innovation and Creativity award in 2012! The Community Education and Outreach and the Education for Sustainability actions were noted and HP “is recognized for involving students in environmental education and sustainability through retreats, active clubs, and initiatives. The school administration is also promoting recycling, working toward increased energy efficiency, and planning a comprehensive school waste program that will involve the students”. 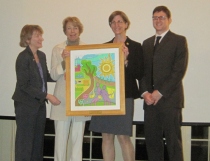 The certification plaque was originally to have been presented at a luncheon at the 2012 NJLM Conference in Atlantic City, which was cancelled because of Hurricane Sandy. A rescheduled awards ceremony was held on January 29 at Forsgate Country Club.  Mayor Hoeslscher, and HP EC & Green Team members Cindy Kennedy and Dr. Mary Ann Schran attended this ceremony; MAS also spoke about the significant  culture change towards sustainability at Harrington Park School. We were given the certification plaque and a very cheerful print, the Innovation and Creativity Award to bring back to Harrington Park.

The 2012 Sustainable Jersey certification plaque and the print were presented to Mayor and Council at the February 19th Council meeting. The plaque will be on display in the main hall in Boro Hall.

Certification is good for 3 years, but the Team is hoping to be able to recertify again before then, as HP is committed to a sustainable future and committed to educating the town’s children and older residents to minimize their impact on the environment and preserve natural resources for future generations.

This entry was posted in School, Sustainable Jersey, Town Events. Bookmark the permalink.

This site uses Akismet to reduce spam. Learn how your comment data is processed.